You’ve all heard of Google Analytics, what about People Analytics? Yes, it might sound futuristic but the smart people at Google have undertake research to identify behaviours for high performing managers. The project named Project Oxygen lead by Neal Patel examined if managers are really needed and if so what social behaviours mattered.

An evidence based approach produced 8 simple rules making it easier to measure behaviour, giving rise to the idea of people analytics.

What if a similar evidence based approach could be used to measure how people feel towards companies and how small ‘nudges’ could produce a massive impact. Could this produce a new approach to recruitment and talent management?

During a recent study by Adoreboard, data scientists based at Queen’s University tracked and analysed conversations and articles across the web in relation to graduate recruitment and emotions expressed towards brands. During our research we discovered a number of insights that would given us a new understanding of the engagement cycle and how it could be greatly improved, with minimal effort and investment.

Law firms invest heavily in campaigns to recruit the best of the best. In fact, on average UK law firms spend å£100,000 per new trainee. But what campaigns are most productive? What campaigns attract the highest calibre trainees? Where should time and money be invested? Do softer ‰Ū÷emotional‰ŪŖ connections between graduates and a brand matter?

Our initial analysis focused on tracking campaigns and interactions between applicants and leading law firms across the globe, including the Magic Circle firms. We monitored major social media, forum and blogs with the expectation we would unearth the most successful campaigns and firms. Logic would suggest that recruitment is transactional – you advertise a job, interview and select the best candidate. You would also expect that each firm would be highly differentiated in their approach.

Our assumptions were wrong.

There was little differentiation between campaigns and the expressed emotional sentiment. Most were met with low activation emotions such as interest, acceptance, pensiveness, with apprehension being the strongest, regularly occurring emotion. Another surprise was that it turns out that recruitment is far from transitional, in fact follows a lifecycle with different emotions expressed at each stage.

An introduction to emotional sentiment – what is it?

Very briefly, emotional text analysis is extracting the emotion from documents such as online news or forums. The most engaging and effective emotions in most cases are at the extremes – rage, terror, ecstasy and amazement. Whilst mid-tier emotions attract little attention and engagement.

Finding the emotion in the campaign

Rather than trends within campaigns, what we discovered was a trainee recruitment engagement cycle. A cycle that was common to all campaigns and seen extreme emotions expressed in one distinct area, regardless of the campaign or firm. 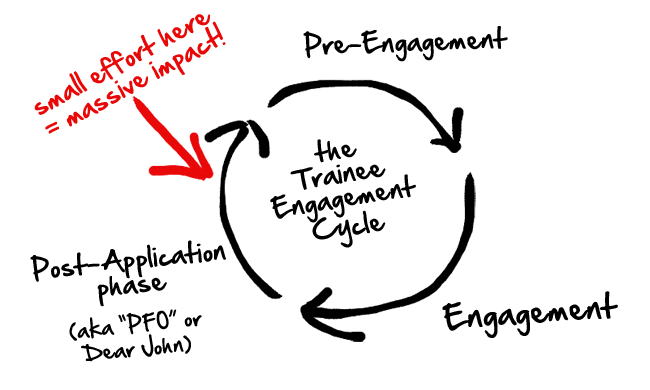 Through conversations found on the social web, a trainee engagement cycle was discovered:

Using advanced analysis, we was discovered that these extreme emotions in the post-application phase where being fuelled by “PFO” letters – rejection letters; we’ll let you figure out the acronym for yourself! 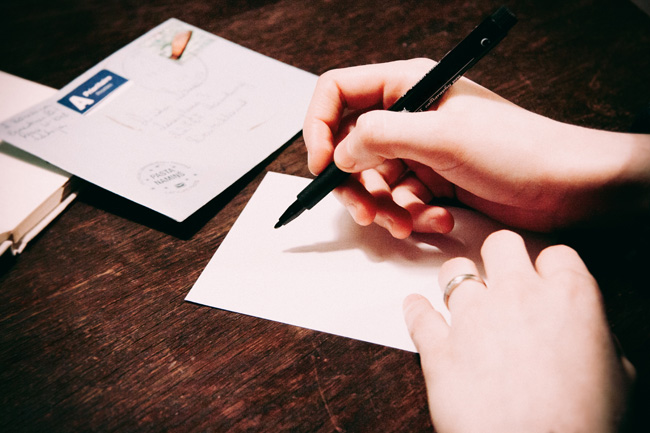 The challenge for the firms is that they all provided the same narrative around being the best place to work. The narrative falls badly when the most important communication between a law firm and potential candidate boils down to three words PFO. This is the impact of a Dear John letter – totally depersonalised the recruitment experience.

Below the top emotions expressed, there were significant expressions of disgust, annoyance and loathing. Much was attributed to poor communication; lack of feedback on rejection and uncertainty regarding when they would receive news. In fact, all the major law firms performed pretty badly at this stage.

Although not high volume emotions, there were small numbers of extremely positive emotions; ecstasy, amazement, admiration and joy.

Conclusion: Where should time and money be invested?

Simple; invest in relationships and compassion.

Students have invested a lot of time and emotional energy into their application and the dream of working at your law firm and as such, reviewing the content of your rejection letters should be the #1 priority. So what are the three simple rules for engagement:

So here’s to people analytics, the ability to make evidence based decisions to improve how people feel about you brand. The power of analytics is that it’s sometimes its the smallest amount of data or insight that lead to breakthroughs. And sometimes even smaller nudges can change a PFO into a Potential Future Opportunity.

Could your business benefit from deeper insights? Let’s chat!