Ministry of Sound – The Making Of “Beat From A Tweet”

Adoreboard jumped at the opportunity to work with Ministry of Sound facilitated by Havas helia to use data to think creatively about how brands perform online as a part of data festival, field.work. After a bit of chit chat “Beat from a Tweet” was born…

The beat features well known brands such as Unilever, Peugeot, First Great Western, Diageo and Easyjet and provides an new approach to understanding the ‘beat of a brand’ online.

For each brand Adoreboard analysed twitter streams for content and over 20 different emotions. From this we turned the data into melodies and rhythms. Our inspiration for the beat came from a previous collaboration project with Patchblocks, who are a fellow Queen’s University tech company and Havas helia where we explored the use of data and music to create a beat for golfing legend Rory McIlory.

The dance track was then mixed and mastered by Ministry of Sound’s Sheldon.

You can watch the video & download the mp3 here.

But for those of you who like the science, here’s a little bit about how we did it.

Firstly, we used the Adorescore an index for brand performance online (ranking -100 to +100) to analyse a range of Twitter feeds to generate the “beats”…

As Adoreboard’s analysis of emotions works on a multi-dimensional basis, a number of additional parameters were used to create variance in the music like repeat and arpeggio effects or selection of chords.

We developed a script to analyse our data for a list of different Twitter feeds and then smoothed the data to reduce noise. For each twitter feed both algorithms were triggered, to produce a compatible c-code which was then automatically send to a gcc compiler toolchain for the ARM processor of the Patchblocks. Patchblocks who are a partner of Adoreboard’s provided a programmable mini-synth modules which allow you to create new sounds.

This generated two different firmwares for each Twitter feed to create different options of how the data could sound. These sounds were then used by Ministry of Sound’s Sheldon to create the beat.

You can watch the video & download the mp3 here. 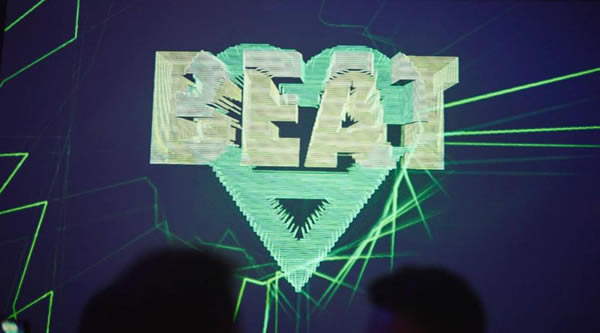 Data was only used to create the music track, whilst the visuals were mixed live on the night at field.work.